…After some practice we were ready for  Jungle Speed Revenge….. 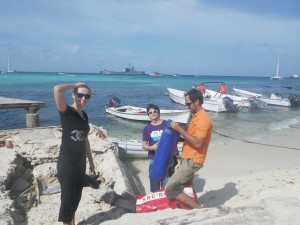 Cora and Laurent said to look for the Black Pearl from the plane, but since we didn’t really know at that time what to look for or where, we haven’t caught it from the birds view (sorry guys).

The adventure on the boat did not started well for Jenny. Nothing serious, nothing that little white pill can fix (no what you have in mind) 😉 . 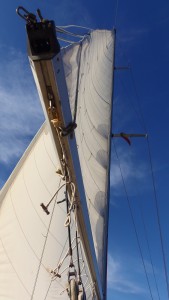 (Jenny)…  See, I’m just a little bit of sea sick, so ten minutes upon arrival on this beautiful boat i had to jump into the water to calm down my uneasy stomach (Laurent said that water will help and he was right). And since my husband, Eliecer, doesn’t have any problems with boats, I can easily say he “jumped” into all boat business real fast. He started to ask guys tons of questions and in the end they even gave him chance to participate in sailing by what he was extremely happy about.

My little school just started, i am a man of airplanes myself but SailBoats seems the best of two worlds, a boat with wings + living space, simply unbeatable.

After a brief introduction of the boat, it’s rules and limitations we are ready to go, finally We hear …PULL UP THE ANCHOR… our pirate friends are on the move. 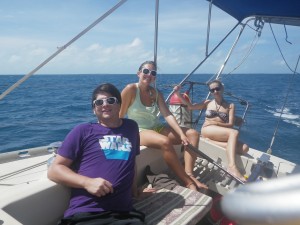 Tough sea and some wind its a good stage for sailboat fun. While the boat was zigzagging following   command of the tiller in Cora’s hands, Laurent pointed that she loves when the boat is tilted, you even could see it in her face. 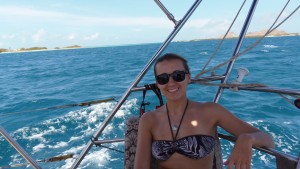 In the meantime Jenny was playing a big movie star, just laying looking pretty and enjoying the moment. 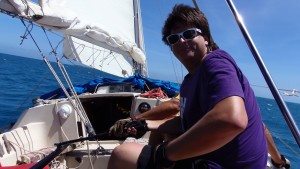 Eliecer was trying just to catch up with the deck activity and helping (at least that’s what he though he was doing).

(Laurent even had chance to try night kite surfing once) and they were not alone, on the nearby island were a group of kite surfers as well, I guess it is quite popular destination for this sport in Venezuela. 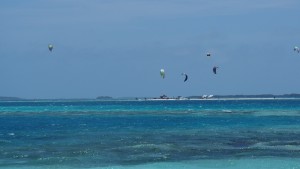 Guys spent hours with kites in their hands, jumping and showing their repertoire of tricks, everything was recorded on video but after a digital file share we ended with those videos so they can’t show it to the world, in any case we can swear to a jury that their jumps were incredible, KUDOS guys. 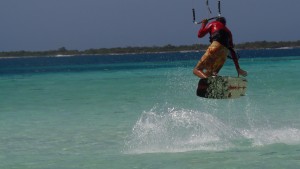 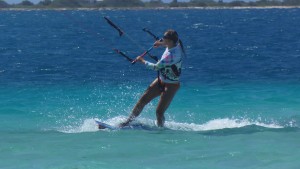 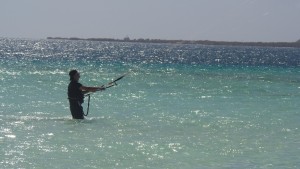 Eliecer was thrilled to be able to practice his skills in new found interest. Laurent was patient and kind enough to allow him to practice with his Kite. 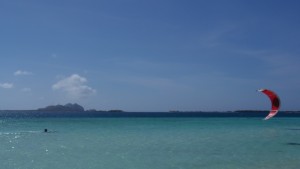 (Eliecer)… Until the Kite fall quite hard on the sea, i heard it, its was BAD, then i though “ Dam it, i broke it and i am unable to replace it, tonight i will walk the plank” but thanks God, it wasn’t anything serious and Laurent and Cora promised that they won’t follow the pirates code. UFFF i was so relieved. 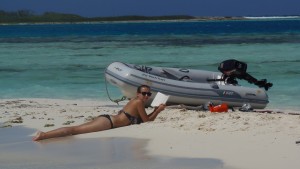 For the first dinner we had a very gourmet pasta with freshly caught sea food (sea snails (conch/lamby) to be exact), and it was delicious but a little bit salty.

On the second day we went to the reef snorkeling. 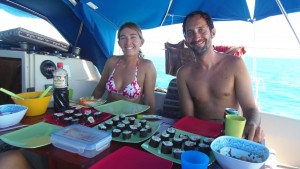 There is one of the most amazing underwater sights we’ve ever seen. Laurent showed us the real pirate skills with spear gun and caught several fishes. So for the lunch everyone had some hand made sushi. Totally fresh and extremely tasty, Jenny wouldn’t know since hers was fishless (Nice for a sushi day isn’t it), she ate all heavenly delicious yogurt made by Cora though ;-), and ever since.

Next day we sailed a little bit further, 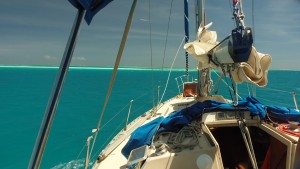 on the new location where guys went for another snorkeling and fish hunting trip while Jenny stayed closer to the boat on the deserted beach and worked more on her tan.

That night on the beautiful little island we made a fire and baked vegetables, 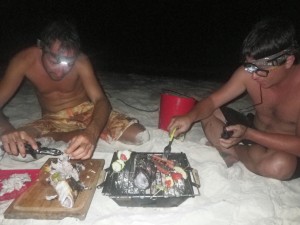 fried sausages and of course fish that Laurent caught earlier. Under the clearest skies that we’ve ever seen we had a dinner that no one of us will surely ever forget. 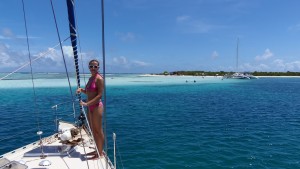 Next day we were coming back closer to the main island of the Los Roques, because day after there was time to return from our great pirate adventure to the real world. 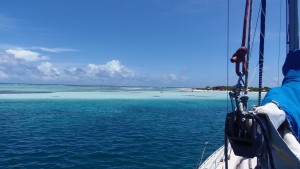 Our last hours we spent in bluest waters we have ever seen, on the beach near Francisqui island. 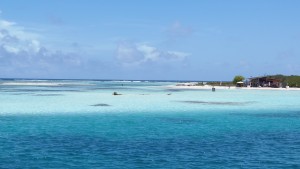 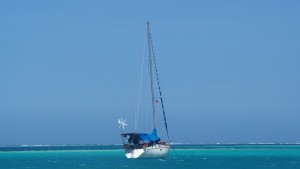 In the end, What we want to say, it’s that we are so so so grateful to Cora and Laurent for inviting us on the Black Pearl, showing that amazing places and sharing their company. 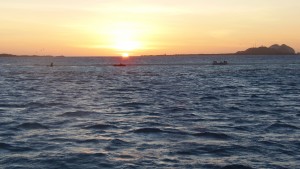 We wish you the very best in this amazing journey, keep ROLLING STONE.

….. BTW Cora is just hardcore with Jungle Speed, she beat us again, don’t go against her, she is the best.